Boston Bruins Team Up with Gentle Giant for 2011 Toy Drive

Boston Bruins Team Up with Gentle Giant for 2011 Toy Drive 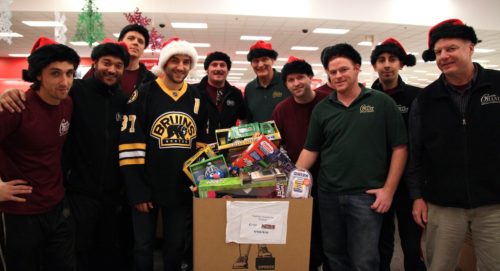 On Monday, December 12th, Gentle Giant teamed up with the Boston Bruins at Target for their annual Holiday Toy Drive. The players bought toys for children who are unable to celebrate the holidays at home.

Members of the 2011-12 Boston Bruins roster are donating money from their own pockets, and the Boston Bruins organization will match every dollar the team raises. Last year $20,000 worth of toys were purchased and donated by the players and the organization.

Bruins Hall of Fame player Ray Bourque started the holiday toy shopping tradition when he was captain. Defenseman Hal Gill and forward P.J. Axelsson sustained Bourque’s efforts. For the third consecutive year, Bergeron has taken responsibility for the program, and will coordinate the delivery of the toys on Tuesday, December 20th.