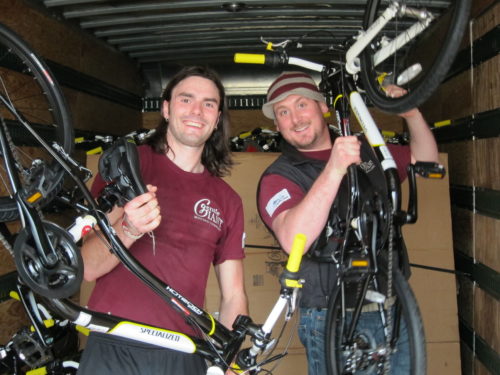 Earlier this week, Gentle Giant teamed up with local charity organization CYCLE Kids to help 4th and 5th graders get out and active on brand new bicycles. Two of our Giants went out on Monday to Wheelworks in Somerville and Belmont to pick up 70 brand new, disassembled bikes. Once assembled, they would wind up in the hands of excited youngsters throughout Cambridge.

On Tuesday morning, the Giants brought the unassembled bicycles to the Kennedy-Longfellow School in Cambridge. This school had previously been a recipient of CYCLE Kids generosity. Soon after, the kids and community volunteers were tearing through boxes and putting together bikes. Wheelworks mechanics would then go through the bicycles to ensure their safety, while the Cambridge Police Bike Patrol Unit talked to the kids about safe riding and responsibility.

After all of the bikes were assembled properly, we loaded the bicycles back into our big purple trucks for the final step of the process. Our Giants set out to deliver the bikes to seven different Cambridge schools two days later. We delivered bicycles to the Amigos School, Baldwin School, Cambridgeport School, Fletcher-Maynard School, Grahamand Parks School, Peabody School, and Tobin School.

We are proud to support organizations like CYCLE Kids. The look of surprise on the kid’s faces when they received the bikes was unforgettable.