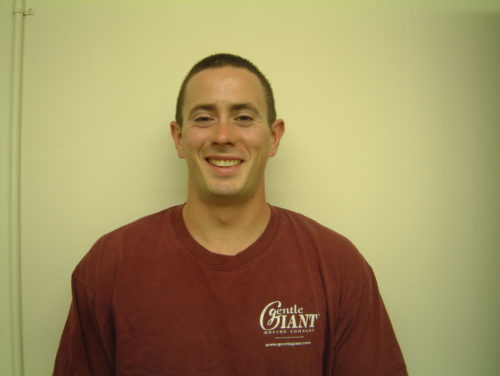 When the name “Jake Zoller” is mentioned at Gentle Giant, everyone’s face lights up as they get ready to share their favorite Jake story. Even those that only worked with him once will certainly have an experience to share. Even though his amazing talent as a mover promoted him to becoming a Crew Chief, other Giants on the crew never minded because Jake had a way of making the challenge fun.

Oddly enough, Giants would jump at the chance to carry a 300-pound armoire up four flights of stairs with Jake. The lucky volunteer would get to listen to one of Jake’s hilarious anecdotes, which blended reality, MAD Magazine and his wild imagination.

Jake’s previous experience working on a farm helped prepare him for his initial role as a mover with Gentle Giant, specifically the long hours and physically demanding tasks. His first year at Gentle Giant was spent learning the fundamentals of moving and watching experienced Crew Chiefs handle all of the logistics of each job. He was a quick learner and was soon among the ranks of these Master Crew Chiefs, running multiple jobs a day.

Jake’s unparalleled reputation with his customers garnered him one of the best “scores” in Gentle Giant history. One multi-repeat VIP customer was so blown away by Jake’s talent that when she needed to move from the States to Israel, she wouldn’t trust anyone else to handle her belongings. This customer paid to fly Jake and his crew from Boston to Israel so they could help with her move. After they executed the move flawlessly, the crew was rewarded by the customer with a 10+ day trip around Israel and Jordan!

After Jake moved on from his career at Gentle Giant, he found the skills he learned here allowed him to succeed in other fields. Specifically, “the ability to see the bigger picture and follow through while keeping the mood light” helped Jake in his recent stint as an ice road driver in Alaska. These same virtues will also help him as he embarks on his latest venture: an apprentice to a ship’s captain on the Arctic Ocean.

Clearly, Jake has an affinity for challenging work, but he faces every obstacle with an infectious optimism and positivity, and never quits until the job is done. He undoubtedly left an impression on everyone who worked for him at Gentle Giant. Many of Gentle Giant’s current Crew Chiefs exhibit the same charisma and hustle Jake demonstrated every day on the trucks and in the office.

Outside of his adventurous careers, Jake enjoys travelling, running, hiking and writing. He currently does not have a permanent home, as he spends most of his time traveling.

“For the last couple of years, I’ve worked a three-week on, three-week off schedule in Northern Alaska. During my three weeks off, I travel to different countries. Right now I have a year off, so I plan to travel.”

This recent excursion brought Jake back to Gentle Giant Headquarters in Somerville, MA, and it was awesome to see him.