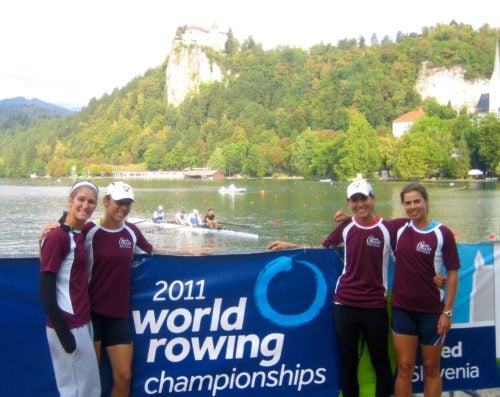 This month, we are featuring multi-medal winning rower and former pack and prep specialist, Hillary Saeger. She is the niece of our founder, Larry O’Toole and worked out of our Boston warehouse in 2007 and 2008.

Like many of our employees, Hillary said her favorite part of working at Gentle Giant was meeting new people on the job and interacting with the customers she’d be packing for.

“I worked with many different people on the job each day, and each had a different background and interesting stories to tell. Going somewhere new and seeing different and unique places was interesting to me” she said.

During her time as a pack and prep specialist, Hillary made sure customers were all set to go before their big moving day.

“I always thought the most challenging jobs were in apartments with very little space on the top floor with lots of valuable things. It was essential for our pack crews to be flexible and creative in packing places like that to make sure everything was prepared properly and safely” she said.

After leaving Gentle Giant, Hillary worked in finance at MIT and is now a rowing coach. Working at Gentle Giant helped her learn to work well with various personalities in challenging environments.

In addition to her experience as a packing specialist, Hillary is an experienced rower. She has been on the U.S. National Rowing Team four times, winning bronze in 2009 and 2011 and silver in 2013.

Hillary is also well-traveled. She competed in the Lightweight Women’s Quad in Poland in 2009, Slovenia in 2011, Bulgaria in 2012 and South Korea in 2013. We wish her the best as she continues to compete!