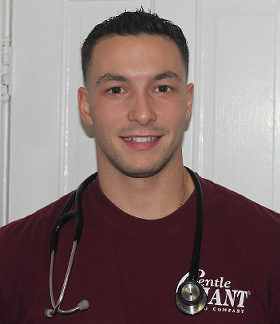 Former Giant Louis Insalaco is an impressive young man. He has benefited from working with Gentle Giant in his pursuit of finishing medical school and becoming a Head and Neck Surgeon. He was still in high school when he started at Gentle Giant after some encouragement from his Uncle Pat in 2004, a longtime leader at Gentle Giant.

On his first day, Louis trained with some of the best leaders in the company. Senior Crew Chief Jon Powell and quick-witted powerhouse Blake McCauley gave him an inside look at life at GG. Despite completing Gentle Giant’s in-class training before starting work on the trucks, nothing could have prepared him for the physically and mentally exhausting aspects of the actual job.

“Being young and the new guy on the job meant I had to really prove myself to Jon and Blake. On the third floor walk-up, I was the middle man on the stairs” he said. “The job was moving so fast I didn’t have the time to think about how difficult it was; I just had to keep up the fast pace set by the Crew Chief. By the time the on-load was finished, it was 3 p.m. and I didn’t even realize that we had worked right through lunch!”

Being with such an experienced crew gave Louis a lot of insight into the subtleties of a successful move. These include communication with the customer and setting a positive, accelerated tone for the move. From this day forward, he modeled his leadership style after Jon Powell.

Lou’s enthusiasm and hustle quickly began making an enormous impression on every customer and crew member he worked with. This led him to become one of the youngest Crew Chiefs in the history of the company. While being a Crew Chief meant taking on a lot more responsibility, Louis had been mentored by the best and was up for the task.

Louis relished the challenge of running jobs, and quickly advanced from being the Crew Chief on small, one-truck moves to commanding large crews on several day jobs requiring multiple trucks.

Today, Lou is often complimented on his grace under fire by the doctors he works with. He explains that “Entering medical school, a lot of my peers simply did not have as much experience performing in high pressure situations where each second counts, people are depending on you, and you have to think quickly on your feet.” He has counted on his experiences at Gentle Giant to help him succeed in college, medical school and now in the hospital.

During residency interviews, Lou discussed in detail how he overcame all the challenges he faced while on the job as a leader at Gentle Giant Boston. “To be a good doctor, you have to make good decisions. I learned the importance of making good decisions during my time running jobs for Gentle Giant.”

Gentle Giant wishes Lou the absolute best in his upcoming graduation from medical school and all of his future endeavors. We are excited to witness his continued growth into a respected leader within the medical community.