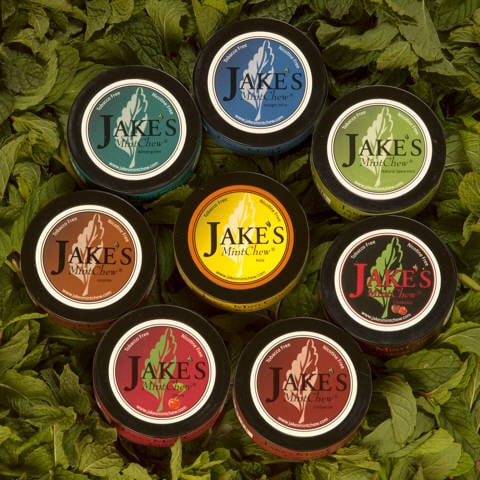 Our Giants go on to achieve great success once their time with our company comes to an end. After departing from the moving industry, former Giants Jake Sweeney and Adam Benezra were on a quest to help people successfully quit tobacco. This was the inspiration behind their company, Jake’s Mint Chew, a product that resembles chewing tobacco but contains mint instead.

When Adam was working at a rival moving company in Boston in the 90’s, he realized he was surrounded by untrustworthy people. He thought, “there has got to be a better moving company to work for in Boston.”

A friend told Adam about Gentle Giant and our focus of hiring honest, hardworking college athletes. Not long after Adam started at GG in 1994, he met Jake, who had started working at Gentle Giant a year before. The two coincidentally attended UMass Amherst at the same time, but didn’t know each other; Jake was studying agriculture while Adam was studying finance.

Working together on a few moving jobs formed the duo’s friendship, but it wasn’t until they took a road trip to New Orleans that their relationship really strengthened.

They remained close friends even after leaving Gentle Giant. Jake got his start in the family greenhouse business, and before long was the go-to wholesaler of greenhouse products across the North Shore. By 2009, Jake oversaw several greenhouses, including a 10,000 square foot flagship greenhouse in Beverly. However, tragedy struck in the winter of 2009-2010 when an ice storm took out this main greenhouse. This put a nail in the coffin of a business already hit hard by the financial woes of this time period.

Down, but not out, Jake departed from the greenhouse business and focused on developing Jake’s Mint Chew. The business makes a mint snuff designed to help people quit harmful tobacco snuff. Given his background with the greenhouse, Jake was comfortable focusing on customer service, phone orders and making new flavors, but he needed help with other areas. Realizing this, he called on Adam to help him with the website, shipping, payroll and other financial responsibilities.

The partners recall their first “business meeting” back in 2009 at a local Beverly bar called Fibber McGee’s. Jake carefully laid out the plan for his mint chew business. Adam instantly saw the product’s potential as a healthy, safe option for people looking to kick their tobacco addiction.

Because the pair had worked together so well during their time at Gentle Giant, they already knew how to motivate and compliment each other on the job. Now embarking on their third year working together at Jake’s Mint Chew, the company has grown exponentially. The pair expects further growth now that they are USDA Organic Certified and show up in Major League Baseball clubhouses.

Jake and Adam look back very fondly at their time moving at Gentle Giant, and still keep in touch with all of the great people they worked with during the early and mid 90’s.