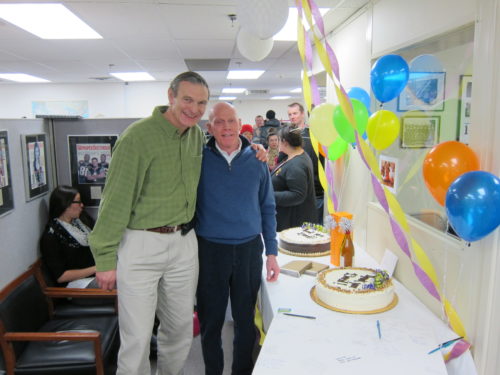 David Lister, former GG Director of Human Resources, was in charge of new hires for over 15 years before his retirement. He took great pride in hiring only the best Giants.

“I believe it starts with hiring the best people, then providing a company culture that makes it clear what we are all about. New hires see what we are all about and are draw to Gentle Giant. There is tremendous pride here in a job well done. People either have that attitude when they are hired, or develop it as they work with the people that came before them” he explained. “My hiring philosophy is simple: I hire people, not movers. Hire the right person and we can make them into a great mover. A true Gentle Giant who will give our customers a level of service second to none.”

Early in his career, Lister was hesitant to get into the business world because it seemed that the only driving factor was money.

“Obviously, money is important if a business wants to succeed and grow, but at Gentle Giant I saw an attitude where people really mattered. It was like a big family” he said.

Before David came to work at Gentle Giant, he was familiar with the Boston moving company because of his ties to Northeastern University’s rowing community and our founder Larry O’Toole.

When David joined the Gentle Giant team in 1995, he started in the sales department.

“I was older and had considerable job experience. I was also an athlete, which fit well with the culture of Gentle Giant” he said. David describes his first year as “fun, interesting, and rewarding” and decided to make a career at Gentle Giant when he knew he had found his niche.

“It was just a good fit. Gentle Giant provided me with a work environment and role that were a perfect fit for me, which I had spent half my professional career trying to find. People get much more out of this job than they ever thought they would when they first came to work for us. We hear it all the time from former employees who tell us what a great experience they had here and how well it prepared them for life and a future career” he said. “This is what we want for our employees, even just the seasonal college kids that work here in the summer. We want working at Gentle Giant to be an experience, not a job.”

Outside of Gentle Giant, David lives in Duxbury and has been happily married for over 43 years. He has two children, four grandchildren and many great friends, many of whom are former rowers. “The sport of rowing has helped shape my life and given me so much that is good” he said.