Rowing is in our Blood

Rowing is in our Blood 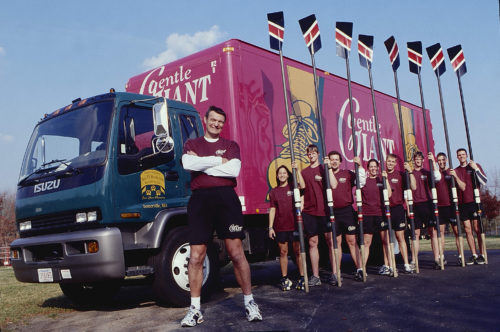 As the leaves change and the temperatures plummet, it is hard to deny the fact that summer is over. In Boston, that means a lot of things. It means shorter days, endless raking, a plethora of pumpkin spice beverages, and it means in just a few short weeks, rowers will be taking over our fair city from all sides. By plane, train, and automobile, these towering athletes descend on Boston for the largest two-day rowing regatta in the world. With over 11,000 participants comprising over 1,900 boats in 61 events, it is Christmas day in the world of rowing. And here at Gentle Giant, the Head Of The Charles Regatta holds a special place in our heart.

In 1980, Gentle Giant was founded by Larry O’Toole, a former Northeastern rower with a big idea. He recognized a niche in the moving industry just screaming to be filled. Until Larry came along, movers were known for their long smoke breaks, sticky fingers, and disheveled appearance. But Larry saw an opportunity to give the customers so much more.

As a rower used to the grueling lifestyle of a varsity athlete, Larry valued dedication, determination, and good, honest, hard work above all else. And thus, Gentle Giant grew out of the early mornings practices, unending workouts, and hours spent in all weather conditions, pounding against the wind and rain and heat of the Charles River. The lessons learned as a rower and through the inspiration of fellow teammates has helped Gentle Giant grow into the industry leading moving company of today.

Even as the company has grown through the years, we have maintained the very core values we were founded on. Whether rowers, rugby players, or other athletes who understand the value of going above and beyond, we continue to hire only the best to be a part of our team.  With the Head Of The Charles approaching, we look back on all of the hard days made easier by the good humor and work ethic of our fellow teammates and Giants.

Gentle Giant continues to have an active presence in the rowing community, both in the Boston area and across the United States. From the recreational to the Olympic level, Gentle Giant has supported rowers through flexible employment, training space and encouragement, and athletic sponsorships. Gentle Giant even has its own rowing club dedicated to introducing and nurturing the sport of rowing, regardless of age, culture, financial ability or physical capability to area youth; and to improving and preserving the environment in and surrounding the rivers we row.

In the 2008 Olympic Games in Beijing, China, two former giants, Dan Walsh and Wyatt Allen, competed in the Men’s Eight event, earning a bronze medal in the process. Another former giant, Matt Muffelman, earned a seat in Lightweight Men’s Eight event in the 2008 World Rowing Championships, earning a gold medal in the process. Many other former giants have earned spots on various national teams, including 30 US National Team members, 10 foreign national team members, and 14 Olympians, including 1984 Olympic silver medalist and Gentle Giant’s crate builder Tom Kiefer.

In the company’s history, Gentle Giant has employed over 400 rowers. Needless to say, we are all excited to see the Head Of The Charles and all of our current and former Giants coming back to Boston for the 52nd year of competition. If you are in Boston and curious about learning more, please come visit the Gentle Giant tent at the finish line of the race course on October 22nd or October 23rd. Just look for the purple truck and our famous feet!