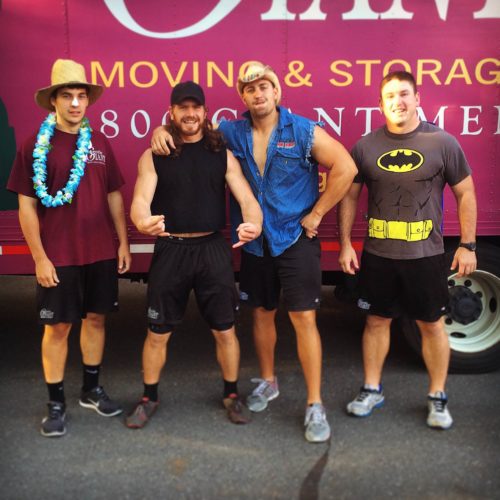 It is Gentle Giant’s mission is to bring the highest level of service to every customer, guaranteed. It is our goal to make every customer a customer for life. Then again, there have been times where a customer will flat out refuse to be happy, no matter what we do.

Two years ago on a Friday afternoon before Halloween, we got a call from a frantic customer. She and her husband were in dire need of a moving company, since the people they hired cancelled last minute. They needed to be out of their house that same night!

Gentle Giant kicked it into gear. We calmed the customer down, gained the necessary information and sent out four Giants and a truck immediately.

When the Giants arrived, they were met by a three-story house, filled with antique dressers with old newspapers and broken dishes. There was a forest of fake flowers and plants valued at $15,000, according to the insurance valuation the customer filled out.

Around 10 p.m., the now 10 Giants began packing the third truck at the house, while our crane continued pulling furniture from the top floor. The crane was implemented because the stairwell up to the top floor was blocked by dozens of artificial trees and decade-old top soil bags, most of which had been cut open onto the carpet by one of the customer’s five cats.

Our customer spent her time on the phone with the sales person at Gentle Giant, screaming that the crew was doing it all wrong. She said that she would not pay a cent of the bill if her demands were not met. Her husband caught the Giants by surprise when he came up from the basement with a shovel and announced, “Keep your eyes peeled for a skunk, I saw one in the basement. When I went to see if it was alive by poking it with this shovel, it ran off. Thank heavens it didn’t spray. So, you know, if you see it up here, don’t hit it with a shovel.”

Finally, around 11:30 p.m., the house was empty and all three trucks were packed and loaded tight. The offload was scheduled for the following Monday when the customer’s new house would be ready. All that was needed was a signature stating everything meant to go had been put into the truck. The crew chief took one look at the wild eyes of the customer and knew she was about to say something outrageous.

“Where is our bag of medicine?” the customer asked.

“There is a bag of all our pills that we need to take, and we could die if we don’t have them for two days.”

“Well, where did you put them?”

“I put them in a box that one of YOUR people was packing, but I never wanted you to put that box on the truck. My pills were in there!”

“T-shirts. I put them in a box underneath some T-shirts, but you had no right to put the box in the truck!”

“Did you tell the Giant packing the box that you put the pills in there?”

“Of course not, because they’re OUR pills!”

“Oh, I see. Alright boys, let’s get this truck opened and find this box.”

The crew of Giants didn’t even think of complaining. They opened the truck they knew had boxes from the bedroom and began unloading the carefully packed items. When the clock struck midnight, the Crew Chief pulled a bag of pills from a box labeled Master Bedroom T-Shirts. The customer huffed and said, “It’s about time. I hope you don’t expect me to pay for this time that was wasted.”

The Crew Chief forged ahead and repacked the truck. Once everything was back in order, the customer said, “Where are my shoes? I will need shoes for tomorrow night. What have you done with all my shoes?”

At this point, the Crew Chief had no choice but to advise the customer and her husband to take some of the resurfaced pills and re-examine the whole situation in the morning. Luckily, this was the perfect prescription. The customers took some pills, signed the paperwork and drove off in their car. The crew stood at the empty house and took it all in. The Crew Chief thanked everyone for their incredibly hard work and advised that everyone rest up over the weekend to prepare for a long Monday.

To no one’s surprise, the customer left dozens of messages for their salesperson over the weekend. When they did get someone on the phone, it was all cursing and outrageous claims. The crew went back out, hustled to get everything into the customer’s new house, and still went above and beyond to make these troubled folks happy. The customer made it a point to accuse Gentle Giant of providing the worst experience she has ever had with any company, ever.

Gentle Giant always finds it unfortunate when a customer receives our top notch service and is still not satisfied. Between us, we were a bit relieved when the customer said she would never give Gentle Giant her business ever again.

Is it too late to ask her to fill out a Comment Card?