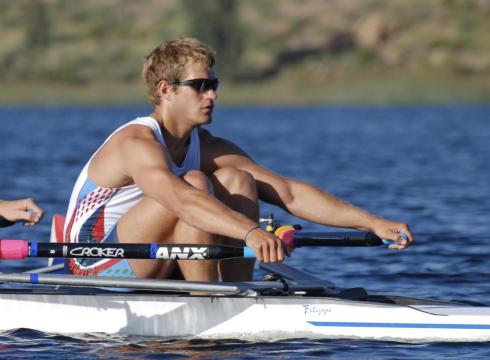 Since opening for business in 1980, Gentle Giant has employed its fair share of incredible athletes. When our CEO Larry O’Toole founded Gentle Giant movers in MA, he did so with friends that he had met through rowing because they were strong, dedicated, and had a “never quit” attitude.One of the greatest Giant athletes, Will Miller, is still making us proud even after he hung up his purple shirt.

Now an Olympic Rower, Will took the time to speak with USA Today about work, his father, and where his athletic drive comes from. The following is an excerpt from an article entitled Will Miller Follows Dad in Olympic Rowing by Michael Florek.

“Will Miller and his rowing teammates worked hard so they wouldn’t be known as “that” crew for the U.S. men’s eight.

After not qualifying for the Olympics at last year’s world championships, the eight needed to win a last-chance qualifier in Lucerne, Switzerland on May 22 for a spot in the London Olympics.

The Americans didn’t want to be the first U.S. men’s team to fail to qualify for the Olympics in the event’s history, dating to 1900. During that time, the USA has won 12 gold medals in the event and 16 total medals, including bronze in 2008.

Miller, a graduate in engineering from Northeastern, was part of the team that beat New Zealand last week by 10 seconds. Miller, who turns 28 in two weeks, didn’t start rowing seriously until college, and since graduation had competed more in the quad than the eight.

Miller knows all too well about the USA’s illustrious past in the sport. His dad, William Miller, was a rower on the 1972 U.S. Olympic team in the men’s coxless fours.

I’ve heard some funny stories from my grandparents about them getting over there and just seeing a hitchhiker on the side of the road, bumming a ride to the course. They stopped and picked him up, and it ended up being (my dad). I don’t imagine that’s going to be happening in this day and age.

Your career is kind of dogged with different decisions you make along the way, and sometimes they’re pretty tough. You don’t know what going down one path will take you and stuff like that. So a lot of times it’s just you get to talk to a guy that’s been there and understands that.

He (dad) understands that we have coaches and everything else so he doesn’t try to impose like technical stuff, or training ideas or things like that because we have coaches dedicated to those kinds of things. But sometimes in the sport, things might not be going as well as you would like them to, and it’s nice to know that somebody can talk you through it.

It was cool growing up because he never really imposed anything on me. He never ever tried and forced me to row or anything like that. I just kind of fell into it on my own.

I grew up playing other sports. I tried rowing a little bit in high school, but I really just decided I wanted to give it a go in college.

I played lacrosse in high school. I was OK. I played on a really good team. We went like 25-0 my senior year, won state. I mean, I wasn’t the best guy on the team by any stretch of the imagination, but it was fun to be on a pretty good team.

I graduated from Northeastern and my original plan was just to get a job. After taking some time off after graduating I found that I missed the competitive nature of rowing. I missed the teamwork and everything else. I just really missed the sport. I started doing a little bit of training on my own and found myself in a position to head out to California Rowing Club in San Francisco rowing under Tim McLaren, who has a great reputation as a coach, so I took the opportunity. It’s been just rowing since then.

The past three years I’ve been in the quad but my background in college, what I grew up doing, is the eight. So the coaches had me try sweeping a couple of times, and I seemed to fit in with the group pretty well. It seemed like a good opportunity for me, so I stuck with it and I ended up in the eight.

Selection for the eight took place up in the San Francisco area because Mike Teti is the eights coach, and he’s also the coach at Cal. I think it was 40-something guys in total had gone through the selection process. It was just a long process of racing and trying out different combinations, and getting data on everybody. So I was down here in San Diego for a part of it, and I kind of went up a couple of months before the naming date.

The thing with rowing is it’s really early on in the Games. Our first race is July 28 and that’s all we’re focusing on right now is that race. Oftentimes, what’s happened in the past, is the opening ceremonies have been tough for rowers to get to because we’re racing the next day.

In terms of external factors, wind is the number one thing. It will change some race times by a pretty good amount. In the eight, it’s not going to have quite as much of an effect on your times because you have a lot momentum.”

Congratulations, Will Miller, from your Gentle Giant family!