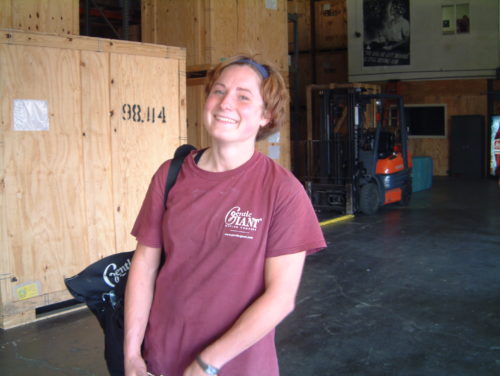 Shortly after graduating from Boston University in 1999, Carson Converse found herself rowing at Riverside Boat Club and in need of a job. Carson’s roommates, who were Gentle Giant employees, encouraged her to apply for a position at the best moving company in Boston. She initially resisted, as she felt her 5’5 frame was not “Giant” enough to handle the physically demanding aspects required to move furniture.

Once her roommates successfully convinced her that her athletic background made her just as strong as a taller Giant, she agreed to an interview. Gentle Giant’s former Director of Human Resources, David Lister, was thrilled to hire her to work on the trucks.

Almost 10 years after leaving the moving industry, Carson still chuckles reminiscing about the first job she worked on. After completing extensive training beforehand, she spent a day packing a customer’s house. Little did she know, this particular move would be an 18-hour ordeal up to New Hampshire and back.

As she rode her bike back home at 2 a.m. after the job, she reflected not on how physically tired she was, but how impressed she was by her Crew Chief: the legendary Steve Hart. One of Gentle Giant’s finest Crew Chiefs, Steve had a calm, assertive approach to running a job. His work ethic showed Carson exactly what it took to take charge and complete a challenging move, all while laughing and making the crew and customer feel comfortable.

This is one of the most important lessons Carson learned while working at Gentle Giant. She admits to being shy when she first started working with the company, but was forced out of her shell quickly through working with such charismatic people. As she felt more comfortable with coworkers and customers, Carson took on more responsibility at the company and became a Crew Chief.

As a Crew Chief, Carson enjoyed proving to customers how a petite woman could show strength, hustle, and command as the leader of a well-oiled moving machine. She learned and preached at Gentle Giant that one should “never judge a book by its cover because everyone has something to teach.”

One of the reasons Carson chose to work for Gentle Giant was the flexibility to pursue her many interests. It has always been our policy to support employees, which includes allowing movers to take extended time off of work with the promise of a job to come back to.

During her time off, Carson pursued rowing and traveling. She took several road trips around the States, backpacked in Utah and Costa Rica, took two trips to Mexico and visited England, New Zealand and Israel.

After leaving Gentle Giant, Carson attended graduate school at New England School of Art and Design and earned a degree in interior design. Once she graduated, she went to work in hospitality design and now focuses on designs for hotels and restaurants.

She still relies on the spacial awareness she honed working at Gentle Giant. “In my work now, it’s important for me to see how furniture will fit in a spot before it is moved there. This saves a tremendous amount of time.”

Today, Carson lives with her husband and longtime Giant Noah Duarte in Charlemont, Massachusetts. They also have an adorable puppy named Flynn.